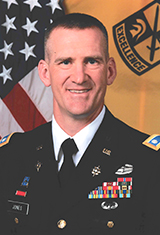 Lieutenant Colonel Tyler Jones is a 17 year veteran of the United States Army, having led Soldiers and operations in the Middle East, South Korea, Europe, and the United States. He hold a Master's Degree in Physics from Michigan State University and a Bachelor’s Degree in Mechanical Engineering from the United States Military Academy. Immediately prior to arriving at Providence College as head of the ROTC department in 2019, he served as a NATO Exercise Planner in the Netherlands.