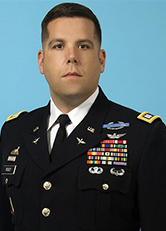 Major Rickey is the program’s new assistant professor of military science. He enlisted in the Army in 1998 and served as an enlisted Infantryman until he commissioned from the Patriot Battalion in December of 2007. He is an Active Guard Reserve (AGR) Aviation Officer and a UH-60 Blackhawk Instructor Pilot. He has multiple combat deployments and returned from a yearlong deployment to Iraq in September of this year. His awards include the Bronze Star Medal, Meritorious Service Medal, Air Medal, Army Commendation Medal with “C” Device and the Army Achievement Medal. He is a Senior Army Aviator, a graduate of the Airborne and Air Assault Schools and has earned the Combat and Expert Infantryman’s Badges. He is proud to be returning to the Patriot Battalion and looks forward to giving back to this great program. MAJ Rickey will serve as the APMS, Operations Officer and an assistant classroom instructor starting in the spring semester.